MLSG at the Pan-African Ornithological Congress 14 - 2016

The 14th Pan-African Ornithological Congress took place in Dakar, Senegal in October. There was inevitably a lot of scientific interest and discussion about migratory landbirds and the MLSG was involved in a lot of this.

This was all excellent and what we might hope for in the context of the widespread declines of migrant birds, but crucially, at this PAOC I detected a change in emphasis. The conference was discussing the problem from the context of carefully targeted research programs and solid data – still barely anything compared to the information we have from northern hemisphere declining bird populations – but something at least. Not just the hand waving and pleas for action that have characterised discussion of the subject at previous congresses. I felt that there was now, at least, a small community of field active researchers looking properly at migrant birds in Africa. We are still a very long way from even one case of identifying the problems facing a declining migrant in Africa and addressing them, but at least we are now on that journey. 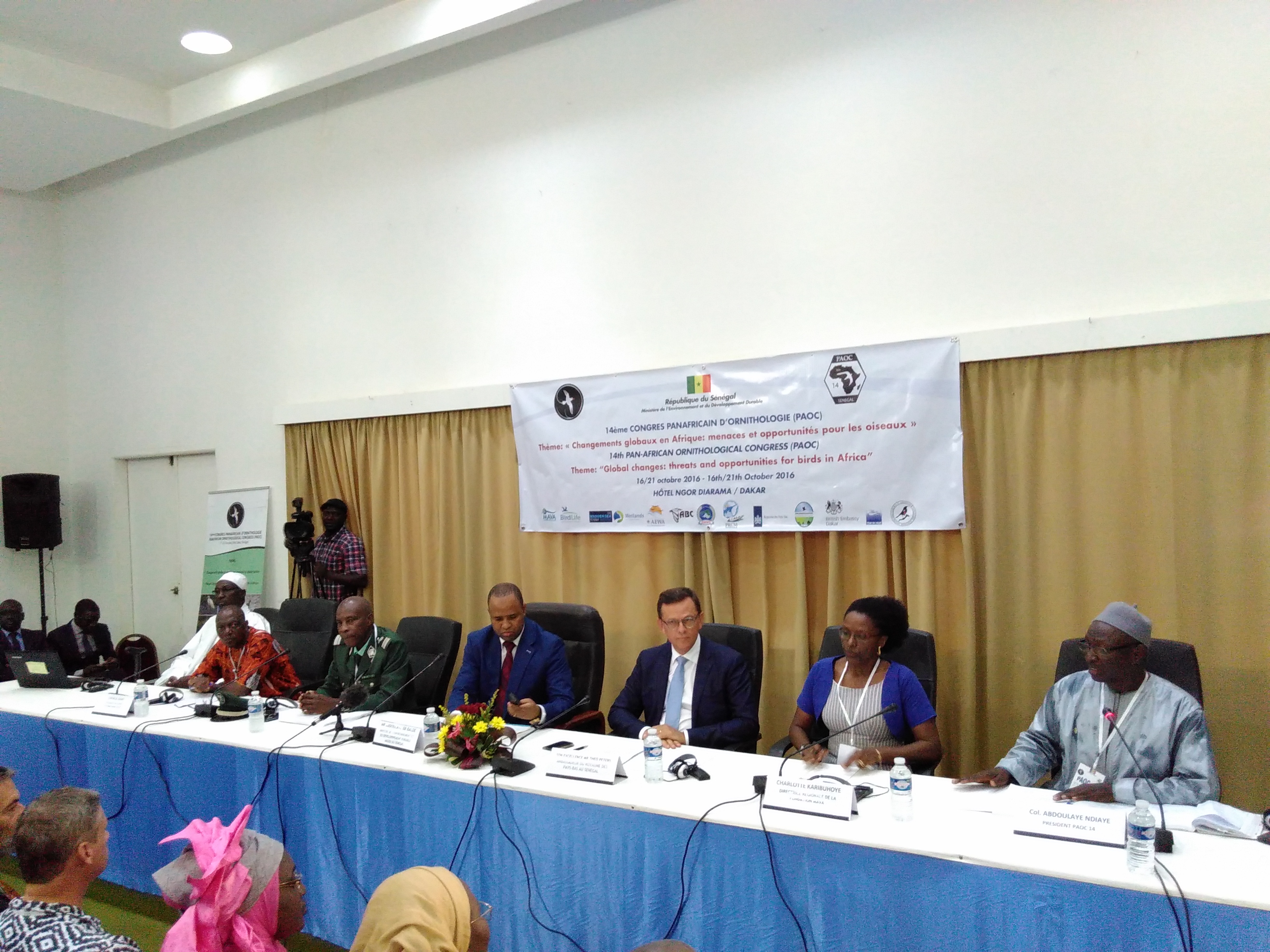 The PAOC had several official sessions dedicated to migratory landbirds – and several dedicated to migratory waterbirds as well. One of the things that characterises the PAOC is the way it brings together researchers that work on an international scale, along one of the most exciting flyways in the world: it remains my favourite conference for this reason alone.

On Monday afternoon we had a fascinating keynote from Kasper Thorup about thinking about migration as something that African birds get up to – and of course some of these African birds cross the Sahara to breed in Europe. Studies of intra-African migration are really at their infancy, but here was a talk that actually featured some data about it, closely followed by Soladoye Iwajomo describing the journeys of the African Cuckoo in Central and West Africa. Other talks described the intriguing possibility of some Baillon’s Crakes breeding in both Africa and Europe; how vocalisations can provide insights into the connectivity of migratory populations within Africa; the trials and tribulations of attempting to track Abdim’s storks as an iconic intra-African harbinger of the rains; and how large scale European census data can be related (or not) to migratory routes and remote-sensed conditions in Africa. The key message that cannot be overstated was that many of the migrant landbirds that raise concerns in Europe are African birds: this insight helps us understand the evolution and behavioural ecology of migrants as well as understand the scale and social context necessary for any conservation solution.

On Thursday we had a whole morning, more or less, dedicated to migrant landbirds. The plenary talk was by Juliet Vickery, Head of International Research for the Royal Society for the Protection of Birds in the UK. Juliet gave a high level overview of the problems Afro-Palearctic migrant birds are facing throughout Europe, but crucially describing how our research can begin to be turned into practical solutions to address migrant declines. New technologies such as tracking and remote sensing are finally giving us an idea of key areas to concentrate in: there is still a long way to go but I detected for the first time in a review like this, that there was glimmer of more of what we do know rather than statements of what we don’t.

I (Will Cresswell) followed on from Juliet by giving an overview of the non-breeding ecology of Afro-Palearctic migrants in Africa: how we still put relatively little effort into studying this, but how we are now getting a better idea of what is happening during the non-breeding season and how this might influence population dynamics. I concentrated on the very interesting, newly emergent connectivity data from recent tracking studies. In short, many European populations of a diverse range of migrant species are spread over thousands of kilometres of Africa during the non-breeding season. The conservation implications of such generally low connectivity are that the loss (or protection) of any non-breeding site will have a diffuse but widespread effect on many breeding populations.

Sam Ivande followed with an interesting talk (I may be biased being his PhD supervisor) on whether Palearctic migrants are generalists compared to African residents: a key prediction for migrants is that they are generalists allowing them to deal with unpredictable non-breeding conditions as they spread over such a wide area of Africa. Sam described how this is likely to be the case, with Palearctic migrants such as pied flycatchers and tree pipits occurring over a wide range of habitats varying in degree of anthropogenic change and vegetation density and structure.

John Mallord gave a fascinating talk about the habitat requirements of wood warblers. They have quite clear preferences for particular tree types that are often the ones to be chopped down by people when farming. Yet, wood warblers are also quite tolerant of farmland as long as some tall trees remain. Two talks on one of my favourite migrants (because we know so much about them but they still amaze) - Montagu’s Harriers - followed. One, on diet from Ben Koks and the second, from Almut Schlaich, on mid-winter movements in response to changes in environmental conditions. The message of resilience and flexibility in migrants, but within limits was reiterated.

Rien van Wijk followed with an intriguing talk about hoopoes, a migrant which could possibly breed at both ends of the flyway, and with a much more itinerant pattern of non-breeding space use. All perhaps suggesting that hoopoes are an intra-African migrant in the truest sense, that just extend their range into Europe to follow the temperate “rainy season”.

The final talk of the session by Jacob Davies dealt with reed warblers and how we need information from all over the flyway to get an idea of how population dynamics of a migrant arise. Again the issue of the wealth of data available from temperate regions relative to that available in Africa became evident. A good reminder at the end of the session of the need for the MLSG to facilitate research all over the flyway.

Several pre-conference workshops were organized for participants the day preceding the official start of the PAOC, Sunday 16th of October. One of these, was on “Building networks across flyways – for partnerships, funding and support” given by Chris Rostron from the Wildfowl and Wetlands Trust, Gabin Agblonon from Wetlands International and Rien van Wijk representing the MLSG. The goal of the workshop was to raise awareness of the importance of networking and how to do it effectively. With about 25 participants of Anglophone and Francophone countries, we practiced elevator pitches, thought out of the box how to get our projects running and approach the right people and developed a standard letter to a potential funder. Already during the workshop the importance of networking became apparent and several new connections were made that hopefully will lead to fruitful collaborations in the near future!

During conference we had a meeting specifically about the MLSG and its aims. We had about 40 people attending; half already well connected to the MLSG and the rest enthusiastic to find out more and to get involved. The main aim of the meeting was to talk to researchers and conservationists (particularly within West Africa considering the conference) about how the MLSG could best achieve its aims of facilitating research along the flyway. Suggestions and points that were discussed were:

The list of points generated from the PAOC meeting is a clear prospectus based on the four themes.

Networking: The meeting itself helped to start the process of generating in country contacts throughout the African region – but clearly there is a lot of work to be done here. New sponsored members were identified to facilitate this and we will take this forward in the New Year.

Information: There is a clear need to develop a more useful bulletin and to keep the website up to date with current information about the people involved. To that end we need to get profiles up from all members.

Data-sharing: This is less clear – we don’t want to reinvent the wheel and there are already many existing relevant databases. As with pre-existing researchers, the MLSG’s function is perhaps best to facilitate links between them rather than create from scratch. To this end, a complete list of available resources would be a useful addition to the MLSG website.

Novel: Again this is less clear. But the opportunity exists for researchers to initiate new projects and research syntheses from contacts they establish through the MLSG…

Overall, the PAOC was just a week and one meeting. It helped focus us within the MLSG on the very large task of expanding the network within Africa, but also allowed us to start this process. The next PAOC will see how well we have done.

One final thing. Please remember to subscribe if you are not a member already or encourage at least one other person to join the network as your New year’s resolution. And don’t forget your profile for the website – please email This email address is being protected from spambots. You need JavaScript enabled to view it. and we’ll gladly take up on it!

Will Cresswell on behalf of the MLSG, December 2016